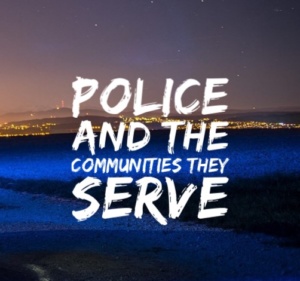 One early morning my husband and I drove ourselves over to my parent’s house. It was September, and we were preparing to go out of town to celebrate my 30th birthday. We were tired and had our jackets and hats on. We were sitting in our car around 3:30 in the morning when a suspicious car slowly passed by our car. (You see, we were waiting for my parents to open their door so we could go inside to sit before they dropped us off at the airport.)

As we glanced over at the car passing by us, we noticed that there were two white men in the front seats. We instantly became nervous by the situation.

What made matters worse is that after the car passed us, the men put their car in reverse and pulled up next to us. They proceeded to get out of the car and rushed towards our car. It happened so quickly……we noticed that they were mid-aged men with bald heads (so, of course, our minds went straight to white supremacists because of their overall look/vibe.) They flashed lights in our car, we couldn’t even see their faces and they began shouting out questions that we couldn’t even answer as quickly as they were firing off.

To be honest, the only thing that stopped this entire encounter from going any further is when my father came outside and I said “Daddy.”

The men jumped back in their car and sped off.

There was no apology, no explanation no form of communication to give us a better understanding of why things happened as they did.

Afterward, I went inside and cried because I didn’t understand why we experienced what we went through. We prayed and were then dropped off at the airport to start my birthday weekend.

I say all this to explain how quickly a situation can be misconstrued.

The police didn’t identify themselves, they saw two black people sitting in their car outside of a house. (Little did we know that our look was similar to the descriptions of a male and female, who were robbing people at gunpoint in the area and we didn’t find this out until later. My mom called the police station as we headed to the airport to report what happened. That’s when it was known that they were cops… until that point they were just random individuals who we had a horrible encounter with.)

We didn’t do anything wrong, we were in the right place but under the wrong set of circumstances.

Here we are, two Christians placed in this situation and could’ve gotten harmed because we matched a description. We weren’t violent, we just looked suspicious enough for the police to force this encounter into happening.

The attitude of the cops is what hurt the most, not particularly what they did. Yes, it was both scary and alarming but we instantly understood why they did what they did once it was explained further. However, how they responded to their actions, in this case, was to not offer an apology.

In their perspective it wasn’t necessary….. but really, it was.

They could’ve chosen to explain away this problem but they chose to instead drive away without any concern for us as human beings and this is an example of how many people within the African American community feel. There are many Americans who have experienced similar and obviously worst situations where the police act upon impulse and impact those who have interactions with them in a very traumatizing way. There is already a painful past that is connected and will forever be a stain upon our humanity, one that dehumanized us and made us to be inferior to others but to continue in ways that the memories of the past cannot be forgotten is what keeps bringing us back to our ungodly beginnings. So there is distrust because some of the officer’s intentions are not recognized to be good.

How can it be if it ends up with the murder of another individual?

How can it be if there is an aggression that promotes no further communication then the sound of their own voice? Their presence should be one of strength and dignity rather than reminders of a corrupt past.

(Within the African American community, a lot of times we give you back what you put out to us…. if you’re nice and pleasant, respectful then you’ll get that back in return but if you’re nasty, disrespectful, sharp you will also get that back as a mirror and reflection of what you put out, and many people may not be aware of that. Even the Bible speaks of treating others the way you would like to be treated, and this definitely has to go both ways.)

It’s such a mixture because within our communities we have those who commit crimes with no regard for the lives of others. They steal from their own people…the young, elderly, their family members. They carry guns and take pride in being a part of gangs….. but do they have reason to…….some but not all. This doesn’t make what they do right by any means but gives more cause to question why it is being done in the first place?

What’s their environment?
What is lacking in their household?
Are they bored and need some sort of activity to give them a focus of what to do with their time/lives?

Questions need to be asked?
Family history needs to be known.

Interventions need to be inserted in some shape or form.
Individual responsibility needs to be taken.

Cops can do some of this but the parents and role models in these individuals lives need to step up, even more, to help and raise their kids. It’s like a teacher, they can’t assume all of the responsibility of what should be happening at home. (Feed the child, teach the child, counsel the child and grade the child. It’s even similar when it comes to a pastor…. they can do what they can as a positive example in a person’s life but they shouldn’t have to assume all the responsibly of another person’s role, who chooses not to step up.)

Yes, there should’ve been a difference in how we were treated, I mean hey, we’re children of God right, but we live in this world just like everybody else and will have trials and tribulations. In our case, the police officers saw the color of our skin and approached the situation in the way they saw fit (which speaks to their training.) They didn’t wait to investigate to even find out who we were. They didn’t care to heal our wounds by apologizing, they were trained to assess the situation and act upon it and so they did, and unfortunately, they also bruised yet another set of people from the African American community by how they responded.

Their speeding off into the distance, as though charging off towards their next victims, left a bad taste in our mouths…..we still respect the police and what they stand for but are very much aware of the ones who stand for hate and others who need more training who have moments of confusion, nervousness, lack of relationship with the communities in which they serve, those who are corrupt and greedy, even those trying to meet their monthly quotas by giving unnecessary tickets.

I do thank God for the brave cops that know how to encounter situations correctly, who protect and serve their communities well and continue to do so even while getting a bad rap because of the negative actions of their fellow police officers.

Thank you for your service!

And, I will continue to pray for those cops that need to see past color.

No one should have to fear police officers…. really one would hope that cops would continuously offer our nation examples and reasons by their character and actions to respect them. Yet, they’re more perceived as a threat who don’t have to answer to anyone, who can escape claiming the responsibility of their poor judgments without punishment. When police are looked at like this, instead of the heroes we grow up understanding them to be, something dies inside each of us…. hope…. trust…. and even faith in what they stand for. These layered circumstances must be better understood and healed across the country.

Blacks can’t place their full trust in a system that has failed so many within in their community because when they cried out for justice they rarely found it. When they reported things, help did not come as quickly as they needed it to come, according to where they lived. There are real pains and grievances that are among us all and aren’t as many ways to get them addressed. So rather than to continue to talk they instead decide to take things by force.

Even the Bible says, if you have ought to bring it to you brother, if they don’t listen, present your case in front of a friend. If that doesn’t work present your case before the church and many people have gone this route and still haven’t seen the progress that they would like to see but does it stop there?

For change to happen we have to change our thoughts and minds on both sides…. cops don’t conform to prejudice, blacks don’t give reason to be misunderstood.

So if that means blacks pull up your pants, don’t give attitude, stop hanging out with the wrong crowd, get to where you have to go and don’t linger then do what you have to do to survive and live another day free from being identified as a troublemaker.

Cops if that means to extend a hand in your communities and get to know those within it, then do so. If that means be cautious but not threatening in your approach then switch that up. If it means taking the time to give an explanation to your actions so you’re not lumped in with bad cops, then it might do you well to do so. I understand you have to protect yourself…..your life but your job in addition to your own preservation is to protect everyone no matter their color and religious background…… EVERYONE!

There is no perfection and as a Christian, I stand on the Lord’s side.

I will remain hopeful for change, prayerful for peace, but still aware of the sin that exists in this world, understanding that God is the only one who can change people indefinitely.