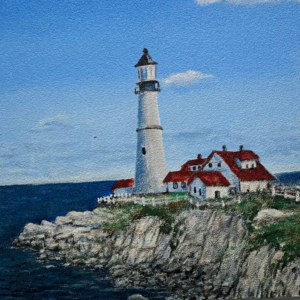 The months of February and March were very difficult for me. I had been experiencing some symptoms in my body that needed to be checked out, which eventually lead me to be admitted into a hospital. However, my post is not about all the circumstances that led to me being admitted (because I am fine and all symptoms have since ceased), but instead, about a personal testimony, I experienced while I was there.

To start, let me just state this:

*In all things we are to give glory to God. So this is in no way, an attempt of seeking glory from man.

*No matter the situation, The Lord can use any and everything to accomplish His will and purpose. In this case, unbeknownst to me, He was going to use me.

So here we go,

When my roommate and I first met, it was late at night. We were both admitted into the pediatric unit because that was the only room they could put us. It was a COVID-free floor and the hospital had limited visiting hours. Here I am, in room 333, with a picture of a lighthouse painted above my bed (which should have already been a sign of God’s purpose and covering.)

My husband had just left. Visiting hours were over and I was a complete mess. Up until that time, I had never stayed in a hospital by myself, so I was nervous.

After an hour or two, my roommate shows up. She was an absolute sweetheart. She was personable. She wasn’t a complainer. And unfortunately, she was stuck with me.

To be honest, I wasn’t up for conversations.  So I was cordial but still kept her at arm’s length.

In the beginning, she did most of the initiating lol.  And although it took me some time to adjust my position, I slowly let her in, and she began to see a different side of me.

As the days went by, we began to get to know
each other better. We began to open up about our reason for being there. Our quick hellos turned into; what did you order to eat and conversations about what shows we were watching.

I mean, we’re both in vulnerable positions, there wasn’t much privacy when Dr’s and nurses came in to discuss our cases. That alone opened up the opportunity for us to speak more often about what we were individually going through.

There was a turning and shifting happening within my heart, to where I became a bit more invested in my roommate. We opened up about our lives and that which originally felt like an inconvenience became more of a pleasurable experience. I was ready to engage.

(Side note: Sometimes when you go through things we can paint the picture that no one will understand our stories, so why bother to tell it. They’ll either look down upon us or just won’t understand. So this creates silence and even further a resistance to engage. After some time, this becomes a pattern of comfort and safety that isn’t fitting for us. Sharing our hearts with others, allows a connection to be had. A better understanding of who we are with all of our frailties and wonders. It’s up to us if we decide to see and present the ugly instead of the beauty and wonder.)

This experience was a beautiful blessing.

The time had come for me to be released. All tests came back as normal and I was just waiting for the discharge papers to go through so I could finally go home.

I found it very peculiar that it took three hours for me to get discharged. So I already knew something was up.

As we were eating dinner, my roommate began to compliment me on how my husband and I communicated with one another. She had privately been watching our interactions and overhearing some of our phone calls and WhatsApp conversations. She pretty much said that it was nice to see a husband and wife get along so well. Where you can tell that they have mutual respect and care for one another, and how she admired us for that.  Even further, desired that within her marriage.

It was at that time that I instantly felt the Holy Spirit tell me to pray over her marriage.

I didn’t know what to say. I knew she was catholic but didn’t know if she would welcome my prayer.

But that was the moment I knew that my being in the hospital wasn’t about me anymore. God allowed me to be present in a moment where only He could provide what was needed.

So I finished eating and built up the courage to ask her if I could pray for her. She said she wasn’t a religious person but didn’t mind me praying with her. And so I did, and she responded with nothing but appreciation.

She was the one God wanted to reach that moment.

And after I prayed, I told her, “if my only reason for being in here was to pray with you, then it was worth it.”

Basically what I’m saying is:

You never know what position the Lord will place you in to accomplish his will or reach someone He desires to touch.

Like Paul had a vision of a man crying out for help from Macedonia
(Acts‬ ‭16:9-10‬ ‭AMP)

The Lord knew what she needed and had me be the point of contact on His behalf.

So then, while we [as individual believers] have the opportunity, let us do good to all people [not only being helpful, but also doing that which promotes their spiritual well-being], and especially [be a blessing] to those of the household of faith (born-again believers).”

Often, it takes something out of our control to position us to do the things we would never do on our own. No matter how uncomfortable it is, there will always be a sign that God’s hand was in it, from beginning to end and everything in between.

It’s up to us to trust Him through the unknown and difficulties.

It’s up to us to come into agreement to be used by Him whenever and however.

It’s not up to me to see what has happened past my moment of obedience but to know that beyond that point, it is solely up to God to complete and fulfill all that He said.

His purpose,
His will,
His way.

In this situation, I was not the picture-perfect Christian. I was dealing with my own stuff. I wasn’t ready to engage and reach out to help someone else…. so I thought.

But little did I know, that what God had already placed within me was still shining brightly, although I felt dim.

This confirms to me that God will not wait for you to be completely through whatever you’re personally going through to put you on assignment. You can still be placed exactly where you need to be, to do His will.

You may not feel ready.

God won’t wait for all things to get better before He decides to use you. (If he did, nothing would ever get done.)

Get comfortable with the idea that The Lord is not looking for you to be perfect but willing to comply with His request.

It doesn’t matter if it’s publicly or privately, the response of obedience and level of submission should be the same.

I can’t say this enough…

Be Responsive To The Guidance Of The Holy Spirit

(especially if your ears have been trained to recognize His voice.)

“Do not quench [subdue, or be unresponsive to the working and guidance of] the [Holy] Spirit. Do not scorn or reject gifts of prophecy or prophecies [spoken revelations—words of instruction or exhortation or warning]. But test all things carefully [so you can recognize what is good]. Hold firmly to that which is good.”

People are waiting for you to be obedient to what God has asked you to do.

Can you imagine someone not getting the confirmation they needed, the prayer they desperately/secretly desired to be prayed, all because you didn’t feel like it 👀

Well, what you feel right about now is the responsibility of your call…. don’t push it aside.

Sit in it.
Hang out with it.
Accept it!

Your life has a purpose and God can take care of you at the same time, He is taking care of someone else.

Rest assured that God is a masterful multitasker lol. Just don’t disrupt the flow by saying No, when He wants your Yes.

I hope this post has both encouraged and blessed you.

Until Next Time ❤️

8 Replies to “The Circumstance, Is Not All There Is To Be Seen”