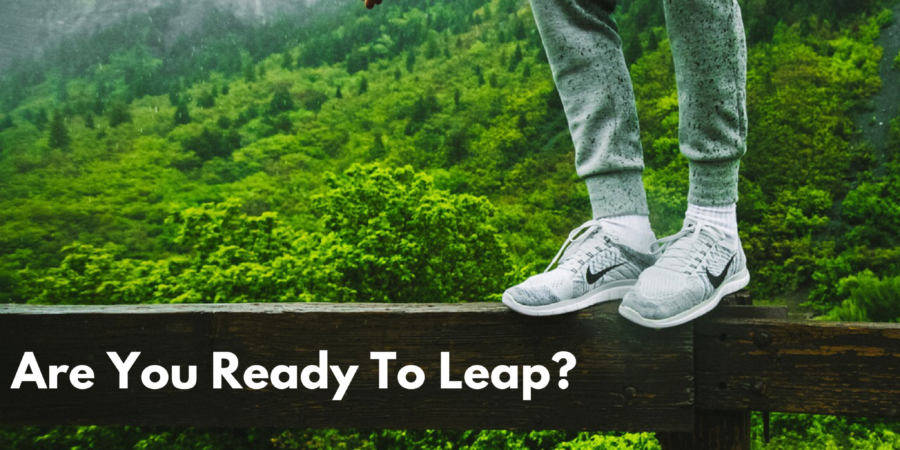 I recently went to Jones Beach with my husband and niece, and after a long day of swimming and soaking in the sun, we came across a young boy. He and his family were climbing an obstacle course.  Everything appeared to be fine until it was time for him to jump off a 30ft ledge.

The young boy had to be around 8 or 9 years old, and the ledge was much higher than he thought it was. He attempted to jump several times, but his feet were firmly planted on the platform. As he eventually began to cry, his parents tried to soothe him, by letting him know that the jump wasn’t as bad as he thought, but those words of encouragement quickly changed, and frustration took over.

You see, there was a line that was beginning to form. Some people had been waiting for half an hour, and this boy was holding everyone up. The pressure was building up all around him, but he was too afraid to move.

Little did we know that on the other side of the park, there was an older man, who was facing the same struggle, as the little boy. They were both stuck up there for a very long time, and although there were many tactics used to get them to jump, they both had to be lowered down by one of the workers.

I relate this to our own lives, when we encounter fear, we don’t care who we’re holding up. All we know is what we’re feeling. There’s a danger, a discomfort, something that is disrupting the flow of our norm.  So we freeze up and choose not to move forward when it’s time.

As I think about it, both of these individuals went through a somewhat traumatic experience. On one end, the boy had to deal with those who shouted out  “just push him off”, and on the other end, the older man had to deal with people saying “what are you waiting for, you’re a grown man, just jump.” Neither comment helped them to overcome their fear, if anything, it challenged their ability to believe in themselves.

Really, no one knows what was going through their minds at the time. Maybe they thought they were going to get injured or even be killed. Maybe they saw their life flash before their eyes, and thought, jumping was no longer worth it. I don’t know, but you can’t just force someone to do something they aren’t mentally prepared to do. Yes, you can attempt to speed along the process, but if they ultimately decide that they’re not ready, then they won’t move no matter what you say. 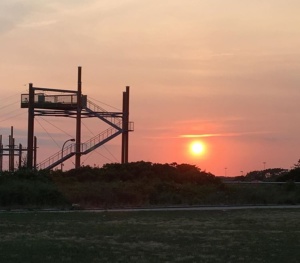 Fear can affect you at any age and will absolutely wreck your life if you give it the power to.

-You can delay progress & growth.

-You can delay your blessing and other’s blessings, as well.

-You can miss out on your opportunity to transition from one season into another- just because you chose to hold onto fear.

**Taking a leap of faith is scary but once you do, you would’ve just done the hardest thing- moved past your fear, by making a DECISION!

(Sometimes, you might have to be courageous, take a deep breath and just jump because staying in that one position is no longer an option.)

The word of God is a guide- it helps to direct our steps. It teaches us how to mentally, emotionally, physically and spiritually encounter the problems in life, and when used, we are better prepared to face our fears.  However, when you allow fear to consume you and let your focus be on all of the negative possibilities and outcomes, you have just allowed it to dictate the direction of your life.

What if Moses was too afraid to speak?

What if Esther, was too afraid to stand before the King?

What if David was too afraid to fight Goliath?

What if Abraham and Sarah, were too afraid to go where God was sending them?

What if Shadrach, Meshach, and Abednego were too afraid to enter into that fiery furnace?

Their fear would’ve affected more than just themselves and the results that they achieved by faith, would never of happened.

Because they set aside their fear, we can continue to learn from their stories.

Look, God wants to use you for His glory, that’s why we’re here. Yet, sometimes our insecurities, can get in the way.

No matter what, we must remember, that our weaknesses don’t matter when the Lord steps on the scene. He will promote the necessary change to happen inside of us, in His time.

So please understand, that you’re not always going to do things perfectly. You’re going to mess up and make mistakes. You’ll be strong somedays and weak others, but every time you take another step forward you are learning how to conquer your fears. So keep stepping, and be gracious to yourself and others, because we’re all just working out our salvation.

From the outside looking in, you could assume that I do all things well but very few know that I struggled with reading, writing and speaking when I was a child.  I had delayed speech. I was never the best in school.  I never did well with large crowds because it gave me anxiety. And, when I was younger, I use to get sick all the time. (My parents even had to put cotton balls in my ears when an environment was too loud, because it was too overwhelming.)

I was never the best dancer, although skilled.

I was never the prettiest, although called beautiful.

I am not someone, who is comfortable with change BUT when God does a thing in your life, it will cancel out all of the things that you may not be, and cause them to work for your good and become areas of STRENGTH!

According to man, I would’ve been marked as unfit for use, but God deemed me as a vessel ready for service.

We may not be good enough in our own eyes and the eyes of others. We may fail (and that definitely is a risk) but when God has a purpose for you don’t allow fear to stop you. Don’t let past experiences to limit you and cause you to fear the future.

Prepare, and then move forward, CONFIDENTLY, knowing that God’s got you!

Everything you experience is part of your testimony- it builds character, shows development and perseverance….which can be used to give God glory. And one thing that I love about this young boys story, is that before he was lowered down to the ground, the worker who was sent to help him, didn’t rush him off the platform. He assisted him by taking his time, making sure he was ready to be lowered. He could’ve made the boy feel defeated, but he didn’t. He took his time in dealing with him and demonstrated kindness, instead of cruelty.

(Aren’t you glad God handles us like that as well!)

You see, in order to break the cycle of fears hold over you, you must choose to accept the new identity that God has placed upon you, and leave behind those things that once defined you.

So, continue to leap off of the cliffs in your life, those that seem so overwhelmingly high, and stand tall as God continues to take you to higher heights! Don’t trip over your own feet, but take one secure step after another, and when you look back, you’ll see how far you truly traveled ❤

I don’t know about you BUT I WANT TO COOPERATE WITH GOD’S WILL & FULFILL HIS PURPOSE.

I want to see God’s reality loosed upon the earth.

I want to see transformation.

I want to see my brothers and sisters in Christ grow & flourish.

I don’t ever want to be the reason someone else gets discouraged, stuck or delayed. Instead, I’d rather be a living example of operating by faith and being a light unto others.

SOMETHING IS CHANGING WHETHER WE LIKE IT OR NOT.

I sense it in my spirit. I know it in my heart. I see glimpses of it in those all around me. In all actuality, it’s already here. The only thing left to do is get on board with the agenda of God.

Once you do, you’ll be able to move forward and fulfill what He desires you to do.

Right now you may have conquered the 30ft ledges in your life, but what if He is now asking you to leap off of platforms 60ft or 90ft up in the air….would you be ready for that?

You may feel like you’re emotionally going through this process alone but this shift is happening, throughout the body of Christ. It’s bigger than one isolated place. This is Kingdom Activity in the works, which effects the entire body of Christ. Which means that we ALL must do our part to fulfill God’s will.

We must be prepared to move when God says to move.

Sometimes we need to hear that

“IT’S OK TO BUILD AND ESTABLISH”

That it’s also  “OK, TO BE NERVOUS AND AFRAID”

“THAT IT’S OK TO TRUST GOD AND JUST DO IT”

Take the restrictions off of yourself.

Reread the examples of other believers who walked by faith and not by sight.

Believe in God’s ability to know what you’re capable of handling in this new season of your life.

Always remember, that it’s one thing to capture and build our own dreams, but our goal as Christians is to fulfill those things that flow from the Father’s heart.

His desire, purpose and will for His people.

In order to see those things come to pass, it will require us to step out by faith.

Although we may be presented with new obstacles don’t allow fear to delay the agenda of God, but be prepared to faithfully participate in His overall plan.

Trust and believe His will, will be done in the earth so begin to confront and conquer your fears one platform at a time!

Thank You for taking the time to read my new blog post. I hope you were able to take something from it.