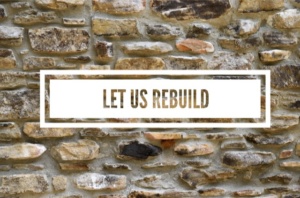 How can we find excitement in being the church again?

If you consider the life of Nehemiah, you can acknowledge that he was a man who dedicated his life to the Lord. He understood what pleased God and desired to help others develop a stronger foundation in their faith. The short version of his story is that Nehemiah was aware that the Temple in Jerusalem was being reconstructed. He knew that there was no wall to protect the city, so he asks the king if he could go back to Jerusalem to help rebuild the wall. The king grants his request and sends him with all the supplies that he would need to get the job done. Nehemiah was met with a lot of opposition but was able to mobilize the people of Jerusalem to assist in the process. He assigned workers to work on different sections of the wall (everyone participated in one way or another) and he was able to accomplish the very thing he set out to do.

As I reflected upon this story, I can see how lack of motivation, awareness, and perseverance could delay victory.

The Lord wants to do mighty things in our lives. He wants the body of Christ to be strong in their foundational understanding of who He is, what He’s done and what He plans to do. There is so much in store for us but, it can be hard to focus on His plans when we have a body that is divided. I do believe that the Lord is rectifying this and drawing us back together but it takes time to bring healing and a better understanding of what is going on.

On some level, we don’t support one another as much as we should. We’ve become competitive, we don’t read our bibles as much and we’re starting to look more like the world than the people God has chosen us to be. I’m not saying this to point fingers and place blame but to only state the obvious, “We can’t be as powerful as God wants us to be without allowing the Spirit of God to change us.”

To advance forward and to be greatly used by God, we must begin to take a good look at ourselves, our relationship with the Lord and how we interact with others. We need one another to do what God is shifting us to do at this time and present season of our lives. We need unity that surpasses race, political affiliation, and church ties.

There have been many blows that have been given to the body of Christ, some by those outside the church. Based on their own experiences, they identify Christians as being hypocritical, overly sensitive and quite gullible for believing in a God that doesn’t exist. They have seen Christians being manipulated into throwing their money away to believe in the prosperity gospel, in hopes of buying a blessing, a prophetic word or even a position within the church that serves their own selfish motives. They have seen Christians shame others by condemning them and judging them too harshly. Some would even say that Christians are the very reason they don’t want to go to church anymore or know more about God (because if that Christian represents Christ, then why would anyone in their right mind want to join/fall prey to such a religion.)

To address the views above:

On the other hand, some blows have come from those within our church. Hurt that has accumulated from people joining your church, becoming family and then leaving abruptly, moving on like you never existed. Some pains have been caused by those who gossip, backbite and cause confusion within the body (who will step over anyone just to get ahead.) Some from physical, mental and emotional abuse that was never spoken about and settled. There are some inconsistencies because there are Christians who go to church (just to say that they do) but they barely follow the principles they should as believers and followers of Christ. I will repeat, this is not to point the finger or even poke the bear but to awaken within us a willingness to rebuild the areas that have been weakened by our earthly experiences.

We are still human beings who have feelings and need healing. We hurt, we get angry, we want justification, we want to be heard and understood. So to present such topics is only to propose that we take immediate action, not to complain about the things going on but to reestablish Gods truth in the earth. Let’s stop misrepresenting Christ by watering down the gospel and force feeding it to people and questioning “why won’t they eat it?” Instead, let’s pray for each other’s healing. Worship Christ as one body under one banner and encourage one another to be who God says we should be. Let’s carry forth Gods word in our hearts, minds, and actions.

Let’s begin to correct these things as Nehemiah did by rebuilding our walls. Let’s assess the damage and get to work so we can fully enjoy what is to come.

Give God a voice through your actions and how you live your life because whether you speak or not, people are watching and determining whether or not you are the light you truly say you are!

Continue to be diligent and thank you for reading my blog!! God Bless

2 Replies to “Renovations of the Heart and Mind”