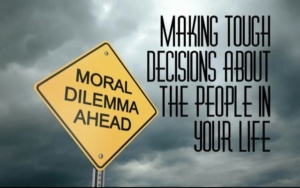 It’s always great to have those in your life that will stand behind you no matter what. They will support you, your journey, your calling, and path but when push comes to shove and important decisions have to be made, we tend to become overly reliant upon their words and desperate for their approval. The Bible often speaks of the frailty of man, our foolishness, our corrupt ways, our tendency to be both self-seeking and vain. These are all areas people can identify with and each of us has to become more diligent to not falling into traits that are not of God. It’s a very real struggle and the trusted people within our lives are there to help keep us from stumbling while also encouraging us to remain focused, committed and humble.

Proverbs 27:6 AMP states “Faithful are the wounds of a friend (who corrects out of love and concern), But the kisses of an enemy are deceitful [because they serve his hidden agenda.]

Ephesians 4:25 ESV states “Therefore, having put away falsehood, let each one of you speak the truth with his neighbor, for we are members one of another.”

Transformation takes time and we’re all on this journey together but when you have “Yes-Men” in your life you must become aware of how they both positively and negatively affect you.

The definition of a “Yes-Man”, is a person who agrees with everything that is said; especially: one who endorses or supports without criticism every opinion or proposal of an associate or superior.

Truth is, “Yes-Men” have a biased perspective and they have formed some unhealthy patterns. They will ignore poor behaviors, approve ideas that wouldn’t normally be approved. They agree without hesitation. They give gifts, compliments and insurmountable words of validation. A “Yes-man”, will protect you as his interest and invest as long as they’re getting something out of it. They will keep you from seeing certain truths and allow you to stay bound to the world they’ve customized just for you. Although their words feed you the confidence that you need, as a Christian, you’ll eventually have to ask these two basic questions; If their intentions are true and of God? And, have they become more of a hindrance than a help?

Some people will see nothing wrong with this but for those who understand how detrimental this can be, I would suggest taking a second look at the people in your life, those whom you have deemed as loyal.

Normally, I would refrain from making specific examples but in this case, I feel that it can be helpful:

All of these previous examples were not intended to be cutting in any way but to highlight the importance of having sober-minded people around you who understand how to use constructive criticism to help you achieve greatness. No one should be used to enable bad behavior and we are the ones that should determine how much power we give those in our lives.

Proverbs 11:14 AMPC states “Where no wise guidance is, the people fall, but in the multitude of counselors there is safety.” This scripture is awesome when you are surrounded by wise and godly men and women, who will advise you and lead you unto safe ground but this scripture will also reveal those in your life who may very well be unequipped to help you see where you have weak, distorted and vulnerable areas.

Truth-tellers are often the ones people run away from because in all actuality “Who really wants to be corrected? It can be hard to accept them, especially when they’re constantly telling you that there’s something that needs to be changed. Their position is not to tear you down but to motivate you to see a clearer perspective, one that you may have lost or become blind to. Jesus was a truth-teller, who had the wisdom to know when to speak and when not to. For those who sought after the truth, they were soon able to find it but for those who didn’t have ears to hear and eyes to see, they were left in the dark.

Faithful advisors, mentors, and counselors will build and not destroy. They will promote without taking anything away. They will tell you when you’re wrong and praise you when you’re right. They will help you work through the rough patches and provide you with information that is imperative to your growth and well-being, instead of leaving you left to be unprotected. They won’t blanket you with lies and deception. They won’t set you up for failure or place you in a compromising position. They will have your back in a way you might not like or even enjoy but at least they won’t lead you down a path where trouble can be found.

Deciding to reevaluate the roles of people in your life is a hard thing to do because you might have to distance yourself from some of them and shake loose those who aren’t good for you. Not because they’re expendable but because it’s necessary. Make the decision to have well-balanced relationships, where those who love you, love you enough to tell you the truth at all times. Yes, it might hurt to hear what they’ve got to say but if they’re really in your corner, you’ll be able to understand that their words are there to empower you and not to insult or inflict harm.

Be mindful of the quality relationships that you keep and let God’s truth be your guide.

Thank you for taking the time to read my blog and God Bless!!

6 Replies to “Keeping “Yes-Men” At A Distance”